Gear Up Landings and the Dog that Didn't Bark

I love Sherlock Holmes mysteries and I was rereading one called “Silver Blaze” a few weeks ago.  In kind of a strange way it made me think of something I wonder about every time I hear about it: How can an experienced pilot land an airplane with the landing gear up? 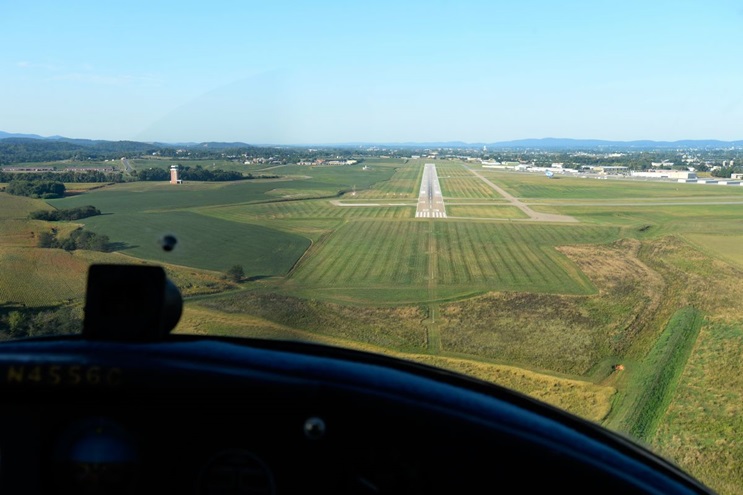 When setting up for a landing, pilots should site down the runway, Aug. 25, 2015, in Frederick, MD. Photo by David Tulis/AOPA.
It happens to general aviation pilots, high time commercial carrier operators, and even experienced Air Force pilots who sat a billion-dollar B1 bomber down on its belly a few years ago. As a matter of fact, the NTSB investigates a gear-up landing about twice a month.

OK, now back to what a Sherlock Holmes story has to do with any of this. Sherlock is investigating the strange case of John Straker, an English horse trainer who has the greatest racehorse of the time named Silver Blaze. He also has a pretty vicious guard dog that keeps watch over the stables. It turns out that the night before the big race Straker was murdered and the horse kidnapped. While following up on clues Sherlock talks to Ned Hunter, the stable boy, who was also on guard that night but he claimed he heard nothing. The most curious thing he didn’t hear was the guard dog barking, which he swore was most unusual as the dog always barked at danger. The bad guy defeated all these alarms, kind of like landing an airplane with the wheels up and the warning horn blaring away in the cockpit.

A barking dog usually gets our attention, and the mechanism of alerting us to potential danger is a complicated and very important function of the brain. Anyone can see just how important this process is to pilot safety with a quick review of the NTSB accident database that indicates nearly half of aviation accidents can be attributed to crew error involving lapses of attention. Attention involves a kind of brain “Cockpit Alerting System” (CAS). In one form or other this ancient alarm system exists in the nervous system of every creature in evolution and is essential for survival. Our internal CAS, the guard dog within the human brain, is called the reticular formation (RF) and is part of that fight-or-flight system (the limbic system) I talked about a few months ago. This little guy carries out two really critical functions. The first is to recognize when something has changed in our environment that is potentially dangerous and the second function is to warn us about it.

The reticular formation stands guard 24/7 and shakes us out of sleep or apathy when it recognizes something out there that needs our attention. It is there to ensure that a preferred sensory input (the danger) receives immediate cognitive processing (attention) over all other inputs. So when it “barks” it needs to be listened to. But there are several problems with this in the modern stimulus-saturated world we live in. As Sherlock Holmes found out, the dog doesn’t always bark, and sometimes that old dog barks but we just don’t pay enough attention to him and act on the alarm.

Attention is limited and selective so a lot of science has been directed at finding the best way to rouse the reticular formation to sound an alarm and get a pilot’s attention. This is a two-fold process. The first is the warning signal itself; the second is finding the best way to ensure a pilot pays attention to that alarm signal. There are all kinds of warning devices like buzzes, beeps, sirens, flashing lights, or voices that will snap us to attention. Also there are physical signals like the stick shaker that vibrates the yoke as a wing stall approaches. This is like those pavement grooves marking highway lanes that hit and thump on your tires if you stray from the lanes. Both are designed to literally shake you into an awareness that something bad is about to happen. Some aircraft systems, like the landing gear, are so important that they come with two warning signals just like the guard dog and the stable boy watching Silver Blaze before the big race. There are lights AND a warning horn. The two signals flash and blare in your ear if you don’t put the gear down prior to landing. But even with this redundant alarm system, pilots still attempt to see how well the belly of an airplane will slide along the runway with the wheels up.  With advances in cockpit avionics and automation, human factors engineers have put new emphasis on understanding just how these warnings can be missed and figuring out a better way to get and HOLD our attention during critical phases of flight.

Working out cockpit alarm systems and the best way to capture a pilot’s attention started a long time ago. Early research in aircraft engineering indicated that female voices were the best attention grabbers for pilots and crewmembers and were more likely to get their attention than beeps and flashing lights. Much of this research was based on pilot experiences, particularly in combat situations. Pilots reported being able to most easily pick out a female voice amid the flurry of radio chatter in the blur of combat. The nickname pilots gave this voice was “Bitching Betty,” who is actually a real woman named Leslie Shook. She has been Boeing’s cockpit alerting voice for over 20 years. She has called it a bittersweet job because she knows full well that pilots generally don’t like hearing her yapping at them, but then again, listening to her saves lives. Now that women are as frequently in the cockpit and ATC as men, this theory is a bit dated, but still a voice, whether male or female, giving a stern warning is the best at getting a pilot’s attention.

The reticular formation actually has a voice too that we usually call “that little voice in the back of your head” and it’s there to relay information about danger in your surroundings. Heeding the warning after it registers is the second part of the alerting process and is commonly known as “paying attention” or listening to “that little voice” after it is aroused by a cockpit alert. This is also complex since it not only involves the cockpit warning but also the cognitive realization in the pilot’s brain that there is danger ahead. I caution my residents in the operating room all the time that the hardest voice to hear is “that little voice” in the back of your head that is telling you something isn’t quite right. It seems more common today than ever that just because the dog is barking it doesn’t mean you hear it or heed it.  Just listen to someone who has done something really silly and the first thing they tell you is “I knew I shouldn’t have done that.” The obvious question then is, “So why did you?” The answer is that you just didn’t listen to “that little voice” that was there all along trying to tell you not to do it.

Too much information is not necessarily good either since this increases cognitive workload and that has a negative influence on decision-making. Cockpit alerting systems address this issue by having a declutter mode. This is designed to reduce the kind of alarms the pilot hears during certain phases of flight that would otherwise be vying for the pilot’s attention (distracting). The reticular formation has an answer to this problem also. The RF filters repetitive warnings out of our consciousness and suppresses some warning sounds. Neuroscientists call this process “attenuation,” a kind of cognitive weakening and eventual cancellation of the signal. Think of a car alarm in a parking garage outside your window. You hear it at first but after a minute or two you don’t hear it anymore even as it shrieks away. That’s because the RF attenuates the alert and eventually suppresses it after judging that it is not a threat to you so your brain can get back to work on other things. This explains how a pilot can land a plane with the gear up while the warning horn is blaring away, especially if it has been alarming for a while. Even though we know how important the alarm is, the RF filters out (attenuates) the repetitive signal as the pilot is occupied with other tasks. After a minute or two, the pilot just doesn’t hear the alarm anymore and makes a gear-up landing while it is wailing away. This is what happens when you stop paying attention and don’t listen to “that little voice.” It’s exactly like Sherlock’s stable guard dog that didn’t bark. The dog was so used to the noise it decided it wasn’t a threat anymore and stopped sounding the alarm. (SPOILER ALERT: This turns out to be the clue that solves the mystery.)

The attenuation process allows the brain to block out some distractions through a process called “selective attention.” This is essentially the process of choosing what to pay attention to so we don’t overload our brain’s circuits. Sometimes selective attention can go too far, resulting in “attention tunneling.” We commonly call this process “tunnel vision.” This condition occurs when a pilot fixates on a specific input while becoming oblivious to all other incoming information. The result is that all the pilot’s attention resources become focused on a single input from one information source while disregarding everything else going on. This is the other factor leading to wheels-up landings.  In many cases, stress, sensory overload, and fatigue will increase the likelihood of tunnel vision. The next thing that happens is trying to figure out how to pay that huge repair bill from the gear-up landing.
Learn the lessons Sherlock Holmes is offering us. Listen when the old dog barks, pay full attention to solving the problem, and don’t lose focus until things are corrected and back to normal. It will save you a lot of money and perhaps your life as well.