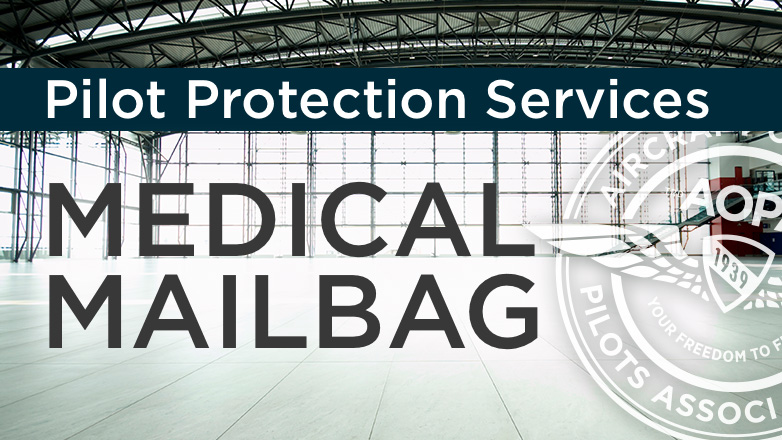 QUESTION: I have a Class 3 medical with Special Issuance for sleep apnea. The rules for the required yearly documentation seem to have changed, and both my sleep doctor and I are confused about what the FAA actually wants in the reports. I’m afraid of getting tangled up in a back-and-forth between my doctor – who doesn’t understand why this isn’t just a standard Department of Transport-like 30-day report, as he does frequently for truck drivers – and the FAA, which apparently doesn’t publish anything useful for medical professionals.

What exactly does the FAA want in its status reports?

ANSWER: While snoring is often the butt of jokes, one of its causes, sleep apnea, is no laughing matter as it literally means not breathing for periods of time during sleep. Commonly due to obstruction to the airway (the kind you breathe through, not fly on) and often – but not exclusively – caused by obesity or consuming too much alcohol, it can have long-term negative sequelae for people. The lack of proper restful sleep leads to daytime drowsiness and episodes of even falling asleep when one should be awake – not a good thing to do when driving a truck or flying a plane, hence the DOT and FAA taking it seriously!

CPAP (Continuous Positive Airway Pressure) or other positive airway pressure devices are the most common form of treatment, and the machines have data cards that can track compliance and utilization data that is provided annually to the FAA. Also, there are now oral devices on the market that are worn in the mouth during sleep and that also have the capability of generating compliance data. Either of these treatment options is fine as long as you have a means of satisfying the FAA that you are using the device on a regular basis.

Additionally, one can consider what is sometimes a definitive, one-off treatment whereby the loose tissues are “tightened up” by an operation or by injecting with a special chemical or zapped with a laser. Also, one can have a new surgical implant that electrically stimulates the nerves associated with how the oral cavity and pharynx behave.

The FAA has an extensive section in the Guide for Aviation Medical Examiners with a plethora of reference information about sleep apnea. In Specification Sheet A, you will find the answer to your question. For PAP or oral airway treatment, the FAA is looking for a target goal of use of the devices at least 75% of sleep periods and an average minimum of about six hours of use per sleep period.

If you have just recently started therapy and are providing an initial report to the FAA, at least thirty days of recorded use with the device should be available for FAA review. Thereafter, on an annual basis, the FAA will be expecting to see a full year’s worth of data showing the 75% and six hours on the downloaded reports. This “encourages” the airman to get in the habit of using the device on a regular basis. These are “target” guidelines, so there is a little margin of error, but not much! The FAA considers sleep apnea to be a significant medical problem in aviation, which it is, so they do take the condition seriously!

Finally, and importantly, it is always worth considering lifestyle changes that might help, such as losing weight, exercising, and reducing alcohol consumption.

QUESTION: In 2003 I started medication for high blood pressure and high cholesterol. I was very active with hiking, surfing, lifting weights three times a week, daily walking and eating responsibly. In October 2014 I had a triple bypass with no prior symptoms. In June 2016 my grafted descending artery partially collapsed so my native descending artery was stented. Again, no prior symptoms. My current medications are Brilinta, aspirin, Atorvastatin, Lisinopril, Metoprolol, Tamsulosin and, I just started Metformin. In 2017, I had Proton Beam radiation treatment for slow growing, localized prostate cancer and, as a metric of success, my PSA dropped from 6.4 to 2.2 and I am progressing very well – still walking, lifting weights twice a week, and eating responsibly. I feel great, no physical limitations except eyeglasses. Having cataract surgery, both eyes, in two weeks.

I’ll be 80 on October 29th and still weigh in the 140s. I have a commercial pilot SEL with private privileges MEL. Last flight in 2013.Would like to get in the Rusty Pilot Program and fly again. What say you? Thank you.

ANSWER: Wow, you have had a lot going on the last few years and it is great to hear that you are doing your part to stay fit and strong. Disease is always a combination of genes and environment – some might say, “Despite all he was doing he STILL had problems, so what’s the point?” The point is simple: If you were not taking all those steps you may well have experienced a less positive outcome!

Let’s start with the bypass surgery. The FAA will want to see your admission history and physical report, heart catheterization report, surgical report, and discharge summary from the hospital records. Since you had another stent later, you will have a separate set of hospital records from that encounter.
Also, you will need a current cardiovascular evaluation and treadmill stress test, current lab work, and a narrative report from your cardiologist. If your treadmill test looks good, you are on allowed meds, and are doing a good job of modifying heart disease risk factors, the FAA should find you eligible for a special issuance authorization.

For your prostate cancer, you need a current narrative report from your urologist summarizing the history, treatment, and current status, including current PSA (prostate specific antigen, a marker of prostate cancer), which appears to be fine. For your cataract surgery, the FAA will need to see a completed Eye Evaluation Form after your surgery and your vision has stabilized.

The medications you noted are all allowed. With metformin, though, you will also need a report from your treating doctor and a current A1c hemoglobin test to show that your blood sugar is well controlled.
Make sure you keep a record of everything you send to FAA and transmit it by trackable means – either certified post with a return receipt or a recognized courier.

A formidable task you have before you, but not insurmountable by any means! Good luck!

In the recent AOPA Pilot magazine article “Rhythm of My Heart” (August 2018, page 26) it inadvertently gave the impression that aspirin alone was a recommended treatment for Afib, but this is not the case. Other drugs, such as Coumadin, are the treatment of choice. Apologies for the confusing message.