In last month’s post we went over some things I’ve always wondered about, like gear-up landings. Let’s talk about another topic I can’t quite understand, running out of gas. Not to be outdone by the catchy Jackson Browne song title I used here, the NTSB titled their report on the subject “Flying on Empty.” In this August 2017 Safety Alert (SA 067) they state, “Running out of fuel in a car is an inconvenience, running out of fuel in an aircraft is unthinkable.” 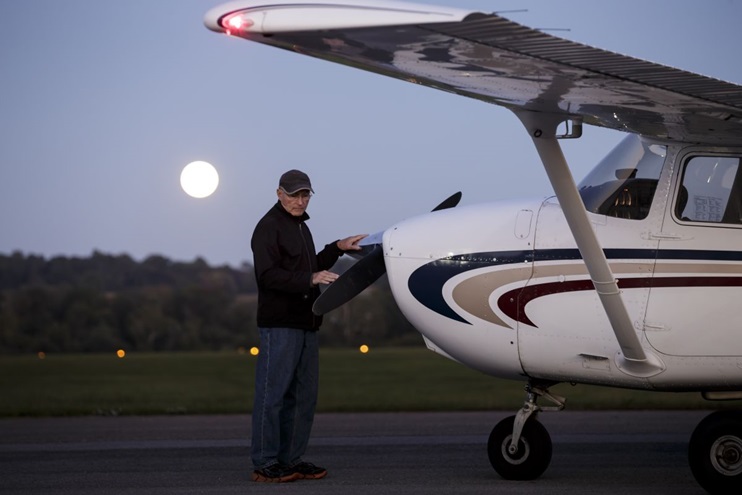 Photography of night flying in a Cessna 172 Skyhawk.AOPA NACC (FDK)Frederick, MD USA
Unthinkable or not, it happens all the time in general aviation, almost twice a week, and as with other topics I’ve discussed in this space, I’m interested in the cognitive process that goes on in a pilot’s head when this mistake occurs. The same question I posed last month applies to this situation: Did the dog not bark or did the pilot just not listen? When an airplane runs out of gas a few miles up in the sky, I have to believe that the old dog is yelping away loud and clear, but the pilot is just not paying attention.

Running out of gas in the air is not quite as simple as it might seem. Running out of gas is referred to by the NTSB as “fuel exhaustion.” There are also accidents, called “fuel starvation,” that occur when there is still gas in the tanks that doesn’t reach the engines. This can be due to things like improperly set fuel selector, water contamination, or cross feed errors. Fuel exhaustion accounted for 56% of fuel-related accidents while fuel starvation was responsible for 35% of these accidents. Other incidental incidents complete the package.

Fuel starvation and fuel exhaustion accident studies show some interesting data. For one thing, this is not something that just happens to low time pilots or student pilots. Almost half of pilots involved in fuel management accidents hold either a Commercial or Air Transport Pilot certificate (48%). Pilots holding private or sport pilot certificates make up 50%. Only 2% of accidents involved student pilots. The NTSB data also indicates that the rate of fuel-related accidents shows an increasing trend line over the four years of the review (2011-2015). Fuel mismanagement is the sixth leading cause of general aviation accidents in the U.S. per these statistics.

Every aviation organization, including the FAA, NTSB, and also in these pages, the AOPA, has offered training and operational lessons to pilots on how to avoid this mistake.  All these publications offer salient advice that, in the end, boils down to “just don’t do it.” But even with all this good advice available, digging a little deeper into the NTSB report, we find that 95% of these incidents involve “pilot personal issues” as the cause. That applies to both types of mistakes, whether there’s gas onboard that the pilot didn’t feed to the engines or the pilot just ran out of gas altogether. The cure for this illness, according to these publications, is a bit of circular logic and states “prudent pilot action can eliminate these issues.” However, before we come up with a cure, it’s important to understand the reasons these incidents occur and what’s going on in the pilots’ heads.

The causes of these accidents fall into several categories, all related to pilot perceptions of their mission and fuel requirements. The first perceptual fault deals with poor decision-making and usually involves multiple areas of the flight. One issue involves weather such as unexpected headwinds or stronger than anticipated headwinds. One of those old pilot adages that have been drilled into us is that “any attempt to stretch fuel loads is always met by an increasing headwind component.” Rescue and military pilots who fly over large expanses of open water are particularly aware of fuel consumption. They have a term called “BINGO,” which is the farthest point they can fly out over the water and turn around and still safely get back to the runway. If they never overfly their BINGO point on the map, there is always fuel to return. That includes accounting for the most unfavorable wind shifts from tailwinds to headwinds.

Another factor in poor in flight decision-making is diverting around weather and not accounting for that in the fuel utilization totals. The same holds for missed approaches and sequencing delays. Carrying extra fuel to divert to the alternate airport and still land with safe reserves is well covered by FAA regulations and known to every pilot, but still routinely ignored with dire consequences.

Yet another perceptual problem is thinking that somehow you are exempt from the laws of physics. Some pilots who are involved in fuel starvation accidents believe that because they “gotta get there” they will receive a waiver from the laws of physics and they can will their engines to run on just vapors, or they can push the throttles up and somehow shorten the time and distance to their destination (thereby using up the remaining fuel quicker). One training lesson that needs to be drummed into pilots is that the laws of physics grant no waivers and apply to everyone equally.  A subset of the hubris of this mindset is not admitting there is a problem when it becomes obvious and declaring an emergency or declaring low fuel and demanding an expedited routing or approach clearance from ATC. Fessing up and getting on the ground expeditiously requires swallowing your pride but saving your airplane and possible your own and your passengers’ lives. The FAA might ask a few questions, but the pilot in command has absolute authority to make these requests and have them granted by ATC.

Improper planning is another category of perceptual errors that contribute to this error. Some pilots just don’t do the math, or they do it wrong and don’t check their calculations. Even worse is that some pilots don’t plan their flights at all. Sometimes these pilots have just chalked it up to “bad luck.” There really is no excuse for this mistake in our current era of computerized flight planning with numerous websites that will do all of these calculations as long as the correct information is put into the system. Guessing or assuming that things will work out has no place in the sky and also contributes to these accidents. Nearly two-thirds of these mishaps result from these types of flight-planning deficiencies such as inaccurate estimation of fuel requirements or failure to monitor fuel consumption in flight, leading to complete fuel exhaustion.

Mismanagement of the fuel that is onboard contributes to almost half of these accidents. These mistakes involve failure to switch tanks or cross feed properly, or just not understanding the systems of the airplane. Again, this is a training, experience, and knowledge error that should be solved long before the airplane leaves the runway.

In this category of mismanagement of the fuel onboard is the inadequate pre-flight inspection.  High wing airplanes require a stepladder and a little more effort to check fuel tank levels than low wings that you can just look into. Failure to accurately sink the dipstick all the way into the tanks and confirm fuel loads can be due to laziness, complacency, or just lack of attention to crucial details. An answer to this is to top off the tanks before each flight and therefore be sure that they are full. This takes all the guesswork out of the flight and also makes the math easier in flight. One fuel exhaustion report I reviewed involved a five-minute ferry flight to an adjacent airport and the plane ran out of gas two minutes into the flight. Another disturbing NTSB accident report on fuel starvation cited a pilot who sumped the tanks for water but failed to notice that the sump valve did not seal after he withdrew the fuel tester; the tanks drained in flight, leading to a crash. Checking to be sure the tank sump valves are sealed after checking for fuel contamination and leakage requires an extra step and is part of a thorough pre-flight inspection.

Distractions can be a factor also. As we talked about last month in this space, pilots facing task overload and distractions can develop tunnel vision that blocks out the low fuel alert warnings. This requires constant reorientation to the instrument scan that must include the fuel gauges on every pass over the panel. This can also be avoided if the pilot knows how much fuel the airplane is using on the current flight per hour and how much was in the tanks to start so even if the gauges don’t track accurately, the math should be rechecked frequently against the clock and ground track.

After looking at all these reports and statistics, I’m left at the end right back where I started. These incidents are hard to comprehend and we have to assume that the dog is home, barking and warning the pilot who is just not listening or hasn’t planned for the mission. Maybe the dog has been barking so long that the pilot is just attenuated to the warnings and can’t hear it anymore and this can lead to a fatal error. In 500 BC, the famous Chinese warlord Sun Tzu wrote The Art of War, which is still quoted and used today in modern battle strategy. A helpful lesson pilots need to learn from this work deals with planning ahead.  “Now the general who wins a battle makes many calculations in his temple ’ere the battle is fought. The general who loses a battle makes but few calculations beforehand.” Plan ahead; it’s a simple lesson that applies as much today as it did 2,600 years ago.