Resources A Wing in Your Eye

A Wing in Your Eye

A wink is a surreptitious means of acknowledging approval, flirting or sharing a secret. Change one letter and we have “wing,” a word close to pilots hearts. 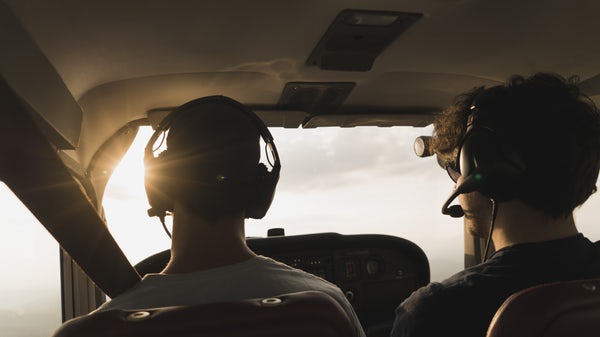 Attached to a fuselage, and we are building a plane, attached to a prayer recalls the 1942 movie, Flying Tigers, where John Wayne references a plane that has been attacked, making an approach on “one wing and a prayer.” But a wing in the eye? A pterygium, derived from the Greek word pterygion means “wing” and refers to an eye condition that is more common in pilots, those living in southern climes and occurs in as many as 1 in 3 people.

Sometimes known as “surfer’s eye,” it is common among people who are attracted to the outdoors, are exposed to sun or dusty environments and is thought to be the result of an aberrant healing response to an insult such as ultraviolet light or a dust particle. It appears as a pink, or pale colored triangular growth of tissue on the conjunctiva, the surface of the eye, often starting in the corner by the nose and traveling towards the pupil. When people first notice it, this can induce fear, but it is usually pretty harmless, if not actually pretty. Occasionally, it affects both eyes and can become inflamed, mimicking “pink eye” or conjunctivitis. I heard one person describe it as having an alien crawling across their eye!

That the little devil often appears on the nasal side of the eye is thought to be due to light traveling without obstruction across the cornea from the ear side, becoming focused in the nasal corner. The shadow cast by the nose makes it less likely to affect the outer corner. Therefore, a more prominent proboscis should protect, and people with smaller beaks might be more at risk!

Because the cornea is very sensitive, pterygiums cause the feeling that one has grit in the eye, itching or burning. And one of the worst symptoms is also associated with sensitivity – the lack of which from other people making one feel self-conscious or ugly. On the rare circumstances where it reaches the pupil, it can become deformed causing double vision or even impairing the visual field.

A precursor to the condition also has a funky name; pinguecula is a small round patch that can grow. The name comes from Latin and means “fat” or “grease” as it can have the appearance of a blob of chicken fat!

As noted above, pterygium is usually harmless, but when it first appears it is wise to see a doctor to exclude other more serious eye conditions such as tumors or corneal disease. Look carefully and you would see that a pterygium has several elements, including a brownish line that contains iron deposits, small gray patches, the “hood” which is bereft of blood vessels and the “head” which tends to have more blood coursing through it.

Pilots should wear sunglasses anyway as altitude increases exposure to ultraviolet light that can cause cataracts, a topic we have covered before. Similarly, sunglasses and brimmed hats (such as those sold by AOPA!) can help prevent pinguecula.

If one appears, having confirmed it is nothing to be concerned about, treatment is to protect the eye and use simple over-the-counter lubricating drops as automatic healing occurs. Surgery is called for if vision is compromised, symptoms do not abate, the lesion does not go away or one is embarrassed. Although quite straightforward to remove, recurrence is not uncommon, especially if one does not use eye protection religiously – and I don’t mean praying before going outside. To prevent this likelihood, surgeons have added a number of maneuvers such as using a special tissue glue to add a piece of conjunctiva harvested from under the eyelid or even a piece of amnion, a membrane from human placenta, adding a drug called mitomycin C or zapping the eye with some radiation.

As with so many conditions, prevention is better than cure and let’s face it, a cool pair of aviators while clambering in the cockpit or chic designer frames while sipping wine at a sidewalk restaurant enhance self-esteem and keep aliens from your eyeballs.

I endeavored to ascertain where the phrase “here’s mud in your eye” comes from and was led to believe it was biblical (holy mud to cure the blind) equestrian (mud kicked into the eyes of a following horse), or alcoholic (face down in the mud from too much happy juice) and I am unsure which is the truth. But I do know that a “sight for sore eyes” refers to seeing something welcome and pleasing that one has missed. And “Easy on the Eyes” a 1952 song by Eddy Arnold, refers to seeing someone beautiful and appealing. It might also be a good theme for pilots – go easy on your eyes and keep pterygium at bay.