Resources Ride Your Bike or Take a Hike

Ride Your Bike or Take a Hike!

During the month of July each year, I DVR every stage of one of my favorite sports events, the Tour de France, to watch and marvel over the superb training and endurance of professional road cyclists. 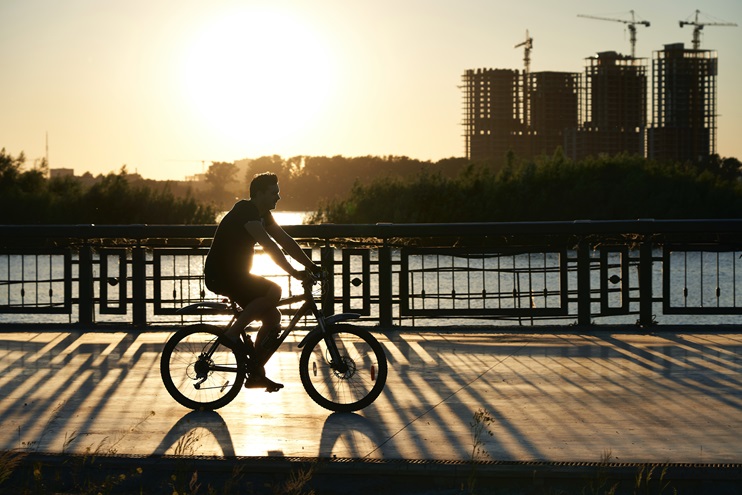 Until a relatively few years ago, the Tour was not televised live; then a network called Versus picked up a cable network channel and began broadcasting the event live with aerial and motorcycle coverage. Part of the allure of the event is the beautiful French, and sometimes Belgian or Spanish, countryside, where the stages are held. Now that NBS Sports Network bought Versus, the coverage is even more extensive and higher quality.

Although I am sure there will be many who disagree, I believe that professional cyclists are among the very best of the elite athletes. They train and compete year round all over the world, in extreme conditions of excessive heat, heavy rain, and a contrast of heat and cold with the mountain stages that are “extremely extreme” with very steep ascents in the heat, and very, very fast descents with dramatic changes in ambient and body core temperatures. This year’s event saw some of the most extreme mountain stages in the Pyrenees with descents of up to 60 mph (90 kph)!

Then there are the accidents that are often dramatic and dangerous. Yet these guys (yes, the professional tour is all men, so far) crash hard, sustain severe road rash, sometimes bone fractures, facial injuries, and a demolished bike, yet they lie in the road or ditch and regroup, fight through the pain, and get back on a fresh bike and continue. They do that for 21 days, most stages being over 100 miles in length, with a couple of “rest days” during the event that concludes on the Champs-Elysees in Paris to reward the winning gladiator with the coveted yellow jersey!

I did a few sprint triathlons over the years and trained reasonably well, although I was never competitive in my age group. My personal best was, well, not all that impressive, but I finished the races. These pro bike racers have to be extremely proficient and fit in several disciplines. Obviously, they have to be good bike riders to be an all-around road cyclist, and that means they have to be good at “fast twitch” muscle physiology, the quick acceleration of a final sprint to the finish line, but also need the strength and endurance for the big long mountains climbs, the very specialized skills for time trials, being able to attack, to chase the leaders, and of course, the overall endurance of so many long 4-to-5-hour stretches in the saddle without a break.

The science involved in training these athletes is amazing. Their nutritional intake with proper balance of proteins, electrolytes, and carbs is customized for each individual rider, and the sport foods that are now available make it “easy” to eat on the run with the variety of nutritional bars that help deliver the fuel that they are burning during the race day, in the ball park of 4,000-6,000 calories! Wow, I wish I could burn off that many with my leisurely two-hour rides!

They must have a good combination of strength, endurance, and intensity training to perform at the competitive level. I’m most impressed by the intensity part of the equation. Intensity level is described and measured in several ways, including percent of maximum heart rate and percent of VO2 max (the maximum amount of oxygen the body can utilize during a specified period of usually intense exercise, and for these guys, that percentage is really high as their pulmonary function is very refined and efficient). I can relate to VO2 max by how short of breath I get running up several flights of stairs. Not nearly as efficient. For me, a three-mile walk with some intervals of running gets me to a level where I can feel comfortable that I’m getting some aerobic exercise as the experts tell us is a good thing.

In the last PPS Insights, Jonathan Sackier wrote of his love of walking. Fortunately, we don’t need to train to the intensity that even comes close to that of professional cyclists. I also love the almost meditative state that sometimes happens when I hike through the forests of our state parks here in Delaware. I remember as a young kid growing up in the Texas panhandle, my mother’s parents were dry land cotton farmers in Hall County. I spent time with them every summer, and my grandfather taught me to hunt and fish. In that part of the country, hunting quail and pheasant was rewarding as it put some protein on the table, it allowed for bonding time with my grandfather and uncles, and it helped me develop an appreciation of being outdoors and motivating on my two feet. Bird hunting in the sand hills on my granddad’s place required a lot of walking, and I recall vividly how my 70+-year-old grandpa would easily outwalk everyone in the hunting party and never show any fatigue. Walking was as natural to him as breathing, and I’m so grateful that gene got passed along to me.

So, the point of all this is that, from a medical certification standpoint, staying aerobically fit doesn’t require high-intensity, fat-burning, exhausting activity. If you’re at the airport and the airplane doesn’t feel like flying, just take a brisk stroll on the grounds, out of the way of moving aircraft and active runways, of course. And if you were fortunate enough to be at AirVenture a couple of months ago, rest assured that most days you probably logged your 10,000 steps!