Resources Tick Tick in the Box

Tick in the Box

In the US, when completing a form, one checks all the boxes, and if a new Bond movie comes along that has all the requisite components, devilish villain, snazzy car with gadgets, beautiful locations, etc., one might also say it “checks all the boxes.” 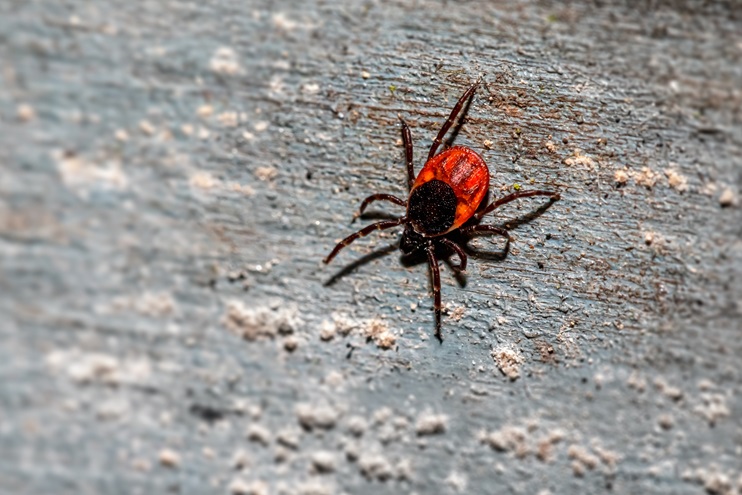 On the other side of the Atlantic, the same circumstances dictate one say it “ticks all the boxes.” Outside of written application documents, or cinematic series, a check is a nice thing to have; deposit it in the bank and life gets better. A tick, on the other hand – or foot or leg – is very definitely not nice. Quite the opposite, in fact. They are trouble and are going to cause pain and suffering. Especially if they carry Lyme disease or one of several other nasty conditions.

Ticks are a type of arachnid, an eight-legged class of creepy-crawly that includes spiders, scorpions and mites. Specifically, they are parasitic and feed on the blood of other animals – commonly mammals and birds but also reptiles and amphibians. They can be quite small initially, but once they have had a good meal, they can blow up to quite impressive size. Ticks are also survivors and have been around in one form or another for over 100 million years.

They often have a series of hosts, a multi-stage life cycle and sense prey by movement, body temperature, smell or even the vibration of a passing animal. Or human hiker. Vampires and ticks have some things in common. They are both hematophagous, meaning they crave blood and need it to live. And both are devious, sneak in and cause grief, but unfortunately ticks are too small to shoot with silver bullets or nail with a stake through the heart; but more of steak later.

Ticks can carry, and transmit, a range of nasty organisms that cause human disease, either viruses, bacteria, or another primitive life form, protozoa. Additionally, some are inherently venomous; one, the Australian tick, can cause tick paralysis due to a toxin in its saliva that interferes with nerve transmission, inducing respiratory distress and even death, although that is usually in the very young, old or infirm. In America, the Rocky Mountain wood tick and American dog tick can also cause this syndrome; globally, over 40 tick types have this capability.

Other diseases you might have heard of that are caused by ticks include typhus, Rocky Mountain spotted fever and a type of meningitis. But far and away the most widely talked about is Lyme disease. This condition is caused by a bacterium called Borrelia burgdorferi and is named for Lyme, a coastal town in Connecticut where it was first identified in a cluster of children afflicted with a strange arthritis in 1975. Now, nearly half a million cases are diagnosed each year in the US, and it can be found in many countries around the world.

The infection is transmitted to humans from the black-legged or deer tick, and probably arose due to changing land use, another situation where human interaction with the environment has unforeseen consequences. We call diseases that jump from one animal to us zoonoses, and the current novel coronavirus pandemic is another such example.

If bitten by a tick, consult your healthcare provider; the very noticeable “target” rash rather resembling the RAF roundel, a central red circle and a larger circle around that, is called erythema migrans and may or may not appear about a week after the bite and neither causes pain or itchiness. A wide range of symptoms can develop from fever, headache, malaise, muscle aches, palpitations, one-sided facial weakness or joint pain. Long-term sequelae may develop including kidney and other major problems such as nerve pain or impaired memory, so early medical intervention is critical. Unfortunately, the diagnostic tests for Lyme disease are not 100% accurate, so being aware of a likely infection is important. Treatment with various antibiotics such as doxycycline may prove effective, but some patients will have enduring symptoms.

Given how elusive the causative bugs are, how problematic the diseases they cause and how difficult they may be to diagnose and treat, avoidance is absolutely critical. I have previously mentioned that pilots have a higher incidence than others, as airports often have grassy areas we wander through, and as a group we are more likely to enjoy hiking, camping and other pastoral activities. Awareness of risk is the first step, then consider using anti-tick sprays containing DEET or picaridin, clothe your limbs and ensure you carefully survey your body for ticks after any time in the great outdoors.

In 1971, one of my favorite artists, Harry Nilsson, recorded “Coconut,” a song where he performed as three people; a narrator, a woman with an obscure symptom and the doctor she consults hoping to relieve her bellyache. He recommends putting lime in the coconut and drinking both together. However, coconut will not prove helpful for this kind of Lyme. Because the deer tick is so small, one may not even see or sense its presence until experiencing the bite with some local itchiness or seeing the bloated tick on your skin. Removing a tick should be done carefully; do not pull or squeeze, but use fine tweezers, grasp the critter as close to the skin as possible and use slow, constant pressure away from the skin. Once removed, wash with warm soapy water, dab with alcohol and either flush the tick down the toilet, drop into alcohol (not the good stuff!) wrap in sticky tape or a small plastic bag and dispose of in the trash. If the bug resembles a deer tick, see your doctor, as even one early antibiotic dose may prevent future problems.

If you do develop symptoms of Lyme disease, ensure you self-ground until fully recovered and report this to your AME, including the results of any tests. Obviously, if one develops any of the more serious effects, other aeromedical concerns may arise. Of note, Lyme disease can be very tricky to diagnose and some patients struggle for years to seek an answer to why they are unwell; if you think Lyme disease may be the culprit, be your own advocate and do not accept being dismissed.

I mentioned stakes above as a method to kill a vampire. But there is another link to ticks. The so-called Lone Star tick has been implicated with the $100 phrase alpha-gal allergy. Basically, this tick (and others such as those living on cats) has a carbohydrate in its saliva, galactose-alpha-1,3-galactose (now you know why we call it alpha-gal) that is also found in red meat. After one or more bites, eating a steak, or other mammalian food products, may result in itchiness, rashes, abdominal problems and even a very dangerous allergic reaction. So, steaks can be dangerous to humans, just as stakes can be to Dracula and his cousins.