Resources The Eyes Have It Part I

The "Eyes" Have It Part I

Last month, my wife and I were out exploring some western scenery around St. George, Utah, above Quail Creek Reservoir. 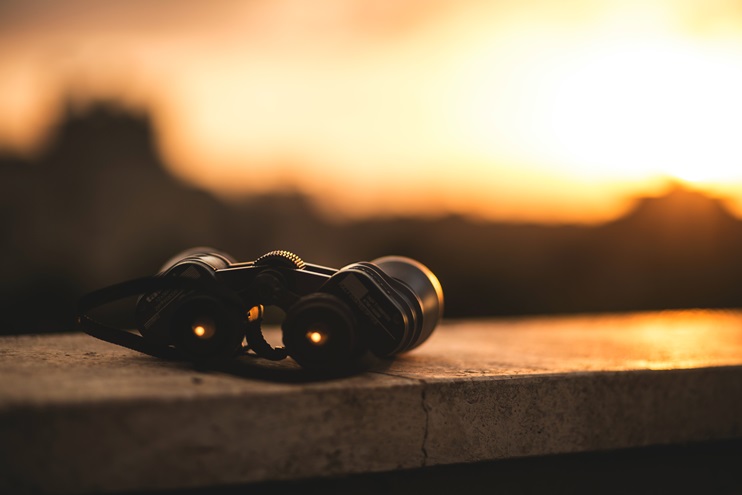 At the top of the hill we found a 50-foot-long concrete arrow pointing off to the west. It was part of an old series of whitewashed “directional arrows” that dates back to the late 1920s and served as a visual trail for early mail-carrying aviators. After a few years a rotating navigational beacon light was placed on a tower about 50 feet above the arrows and used by the pilots for night flying and in poor visibility. Being able to visually navigate in the sky is the most basic skill we learn during our first flying lessons and the importance of this hardly needs mentioning. A recent FAA circular agrees: “Even with advances in avionics, aviation safety is still dependent on the pilot’s ability to efficiently process the visual scene, both inside and outside the cockpit, while controlling the aircraft in the aviation environment.” I guess the FAA officials read HG Wells, “.... in the air there are no streets, no channels, no intersections. In the air all directions lead everywhere.”

Whether it’s flying VFR and “visually following roads” or tracking arrows on the ground, all of this is totally dependent on our amazing sense of sight. Looking down at those arrows got me thinking about something we too often take for granted, our eyes. Our eyes provide the most voluminous and the most critical of all the billions of sensory inputs going into our heads. Certainly flying airplanes, and doing pretty much everything else in our lives, is totally dependent on our eyes working right. Our eyes have a simple task of turning light into meaningful information for our brains to process and use. The manner to accomplish this is far from simple; it’s extraordinarily complex. Let’s go over some basics of how our eyes work the miracle of sight, then next month we’ll talk about how they can play tricks on us that impact safety in the air.

The eye is an amazing structure that’s designed to focus incoming light onto a “movie screen,” called the retina, in the back of our eyeballs (the globe). Light first has to pass through the front of the eyes (the corneas) that are the outermost layers. The transparency of the cornea is essential for good vision and can be affected by advancing age that leads to opacification of the membrane, something we know as “cataracts.” The way light is focused on the retina is dependent on the lenses in front of the eyeballs – the eye’s lenses are what your doc adjusts with corrective glasses to sharpen focus. The pupils, kind of like a camera’s aperture, regulate the amount of light coming into our eyes. The size of the pupils’ opening is always changing to allow more or less light to enter depending on the time of day and ambient light. This system is muscle driven by tiny strands of muscle fibers. The iris, that’s the colored part of the eyes, aids filtering of light and has a really important role in refining the amount of light that gets to the retina. After getting past the lens, light then passes through a special liquid that fills our eyeballs called “vitreous humor” – not meant to be funny though. The pressure of this fluid is critical to maintaining eyesight and adjusted by little channels. If the pressure rises it’s called “glaucoma,” something else your eye doc checks at every visit. This needs to be adjusted to avoid the risk of losing your eyesight from excessive pressure on the retina with advancing age.

The retina uses photosensitive cells to detect light energy. Another risk to eyesight is buckling of the retina or separation from the back of the eye (called “retinal detachment”) that acutely alters vision and requires emergency surgery to repair. There are two different kinds of cells in the retina. One is called “cone cells” that are sensitive to bright light and colors and used primarily during the daytime; these cells give us the most accurate visual acuity. Cone cells are concentrated in a small area near the center of the retina called the “fovea.” This is the spot on the retina on which most visualized objects are focused by the lenses. The problem is that at low light levels, a blind spot develops in the center of the visual field because the ambient light is below cone threshold. There are other cells in the retina called “rod cells” that compensate for the low light blind spot and are almost 10,000 times more sensitive to light than the cones. Although the rod cells are reactive at lower levels of ambient light they are not sensitive to color, so at night we have very poor color vision. Circling out from the central fovea there is an increasing number of rods and a decreasing number of cones, and by the time you get to the periphery of the retina there are no cone cells. That’s why flying at night we’re taught to offset our vision slightly to identify objects out in front of the airplane since that focuses faint objects onto the peripheral parts of the retina and provides the best low light visibility. All the information from light stimulation to the retina is consolidated and transmitted to the optic nerves that are attached to each eye and then sent up to the brain for processing. There are no cones or rods where the optic nerve joins the retina at the very center; that means there is another small blind spot in our vision and another reason our vision is better when we slightly offset our view.

Another way we compensate for this little blind spot is by comparing the views from each of our two eyes, with each one compensating for the blind spot of the other. Looking with both eyes at objects is called “binocular vision,” just like binoculars we use with both eyes. Binocular vision depends on coordinating the movement of our two eyes. You move your eyeballs around with muscles (“extraocular muscles”) that are driven by three nerves coming out of the brain (“cranial nerves”). That’s why when your doc is doing a neurological exam he tells you to track his pen around in front of your face while he watches your eyes move to confirm all the connections are intact. Each eye has six independent muscles that coordinate your two eyes working together and looking in the same direction. Any imbalance of the strength of these muscles leads to tracking errors resulting in loss of visual acuity and “double vision” (called “diplopia”). The coordination of these muscles is essential for another critical capability our eyes provide us as pilots. Since our visual angle is very slightly different in each eye, the brain processes this information from those subtle differences to provide us with three-dimensional sight and the ability to position objects in space. That’s how we know exactly where things are around us, how far away something is, and whether it’s getting closer or farther away. The colored position lights on the wings of airplanes are designed to help us with this orientation in 3-D space and tell us if we’re on a collision course with another aircraft based on the side the wing lights are on.

Light is polarized, meaning that light waves are oriented in a specific direction. That’s where the idea of “polarized sunglasses” comes from. Polarizing filters allow light to pass through only if it’s oriented in the same direction as the sunglass lenses so it limits the amount of light that enters our eyes. You can check your own sunglasses for polarized filters by holding them up to the light and rotating the frames 90 degrees. If the light intensity changes the lenses are polarized. Polarizing lenses have several disadvantages that impact flight safety, and the FAA specifically recommends against use of polarized sunglasses on the flight deck. These lenses hinder your ability to see flight instrument displays because the transparent cover over the instruments also polarizes the light from the display. Some of the light will be blocked unless the light happens to be oriented in the same direction as your shades, and you’ll see dark patches over the displays that could cause you to misinterpret the information. Partial polarization of sunlight by the atmosphere also occurs, so polarized sunglasses can obscure parts of the sky and cause the same kind of dark bands when searching the sky for traffic. Another thing to keep in mind is that supposedly sunglasses reduce glare but the truth is that they generally don’t. The usual filter lens reduces the brightness of all objects by the same amount and does not change the ratio between the brightest and the darkest areas so the glare is still present.

We all know about oxygen, hypoxia, and altitude, but it’s really important to know that of all other body systems our eyes are the most sensitive to any decrease in oxygen levels. The detrimental effects of hypoxia on vision are much more profound than the impact of medication, alcohol, or any other factors known to impact flight safety. The negative effect of hypoxia on vision starts at a cabin altitudes under 10,000 feet MSL and only gets worse. Without supplemental oxygen by about 16,000 feet MSL, 40 percent of visual capacity and the ability and accommodation (focus) and convergence (binocular coordination) are severely decreased. From 16,000 to 25,000 feet, changes become severe enough to make us effectively blind. Also visual reaction time is slowed, motor response to visual stimuli is sluggish, and mental processes of images start grinding to a halt. So as altitude increases, the ability to focus on objects is lost, our binocular vision is lost due to lack of coordination of our eyes, and everything outside the cockpit disappears, instruments become blurred, and night vision is totally degraded. Another effect of hypoxia is to the outer layer of the eye, the cornea we talked about above. This thin membrane has no direct blood supply so it gets oxygen absorbed directly from the surrounding atmosphere, making it extremely susceptible to hypoxia. Since contact lenses sit on the cornea they can further impede oxygen absorption by the corneal membrane. That’s why flying for long periods of time with contacts can also lead to fogging and blurring of vision.

As miraculous as our sense of sight is, our eyes still play some tricks with us. There are numerous visual illusions that are the result of the way our eyes process light images and our brain interprets them. I’m not talking about some “optical illusion” in a Las Vegas magic show where the performer can make you believe you see an elephant disappear into thin air. There are some very real and potentially risky visual illusions that can compromise flight safety. Consider a recent analysis of 76 approach and landing accidents and serious incidents conducted for the Flight Safety Foundation (FSF) that found more than 20% of accidents involved flight crew disorientation due to visual illusions. Knowing how our eyes accomplish the miracle of sight can help to avoid these incidents, and next month we’ll talk about how it’s done.